Solar panels of a flat roof – the Pros and Cons

Installing solar panels on the Gold Coast flat to a very low pitch or flat roof is not usually recommended as when solar panels are installed this way the self cleaning capability of the solar panels is diminished. What tends to happen is the dirt that builds up on the solar panels is not effectively washed off by the rain, so the system may not function quite as efficiently and will possibly require additional cleaning.

The self cleaning aspect is certainly a detrimental point about installing solar panels flat to a flat or low pitched roof, however the only other option is to install the solar panels on tilt framing to achieve the desired tilt and the benefits this provides (higher power output and self cleaning). Tilt framing certainly has its benefits however there are drawbacks which need to be considered as follows: 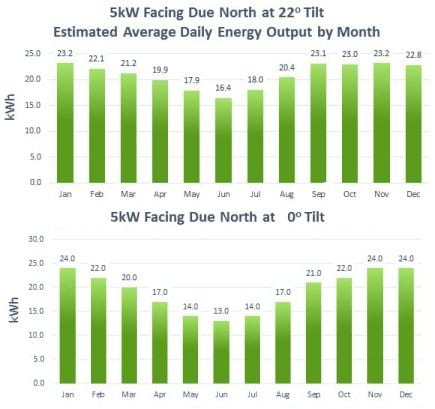 An important point to take into consideration when installing solar panels on a flat roof is the performance of the solar panels either installed on tilt or installed flat. Over the entire year the difference in solar production from a system installed at a pitch between 22 and 30o is around 10% higher than a system installed directly to a flat roof. A point to keep in mind here is that this 10% difference in power is not evenly spread over the year as can be seen on the chart to the right.

This chart shows that a 5 kW solar power system installed flat to a roof in the middle of winter produces around 3 kWh less power per day than the tilted comparison, but in the summer months it actually produces slightly more power than the tilted system!

On the Gold Coast and Queensland in general this is good to know as one of the main loads that solar power is used to offset is air conditioning, which always tends to be working that much harder over the summer months, so system installed flat to the roof would work very well to cover this type of summer load.

At the end of the day a 10% difference in power production is not a massive difference, especially when roof space is at a premium. When installing solar panels on tilt framing you can only install around half the solar panels you could if the system was installed flat due to the additional space required to ensure the rows of solar panels don’t throw shade on the solar panels behind. If you are wanting to maximise the amount of power produced by a system being able to nearly double the number of solar panels for an efficiency loss of around 10% makes good sense.

The best option for you really depends on your unique situation. As discussed the following points are the main things that need to be considered:

So at the end of the day the correct answer all depends on your unique requirements. if you are anywhere near the Gold Coast we can certainly assist you; feel free to contact us here for expert advice from the Gold Coast’s solar power experts – Gold Coast Solar Power Solutions.