It’s a good question, let’s have a look at the answer.

With the lowering of the amount paid for feed in tariffs around Australia it makes a whole lot of sense to try and use all the solar power you produce rather than send it back to the grid as surplus power on a net feed in tariff. Here on the Gold Coast we currently pay around 27c (inc. GST) per kWh of power we take from the street, but the the best we can hope to be paid for any surplus solar power is 10c from certain electricity retailers.

You don’t have to be a mathematician to work out that you’re much better off using your solar power yourself rather than sending it back as surplus to the grid, but how does surplus power work if you have a single phase solar power system on a 3 phase supply?

3 Phase Power And Solar On 1 Phase – What Physically Happens

If your solar power inverter is a single phase inverter and you have a 3 phase power supply at your property then when you’re producing solar power in surplus to the power being consumed on that phase the surplus power will be sent back to the grid. This is what physically happens and that may make you think that the best thing to do then is either get a 3 phase solar inverter or load up the phase with solar connected to it with everything that is used during the day to ensure that as little power as possible is sent back to the grid. If what physically happens is what you are billed for then that would be 100% correct. What is most important though is what is metered by the energy provider in your area and what you are consequentially billed for.. 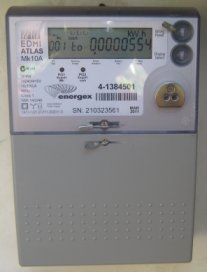 The 3 phase meters used on the Gold Coast by Energex and it seems in most other areas of Australia as well are the Atlas EDMI polyphase meter (learn how to read it here). When this meter is programmed to handle surplus solar power it is programmed in such a way that it takes into account the power consumption of all 3 phases before it sees any solar power as surplus to your requirements.

Say a property is using 400W of power on each phase, so over the 3 phases that’s 1200W (400W x 3 phases) of power being consumed. A solar power system is connected to 1 phase of the house and is outputting 1500W of power into that one phase.

What Physically Happens: If only 400W of power is being used on the phase the solar is connected to and the inverter is producing 1500W then 1100W (1500-400)of power is surplus to that phases requirements and is sent back to the grid as surplus power.
What The Meter Reads: The Atlas EDMI 3 phase power meter will see the power being consumed on all 3 phases; 1200W in our example. It will only count any surplus power after this combined consumption is covered, which in our example will be 300W (1500W-1200W) of power surplus to the sites requirements.

So What’s Best For You?