You may have heard of solar power battery storage before, but why has it become such a hot topic recently?
The main reason can be found in the following graph. 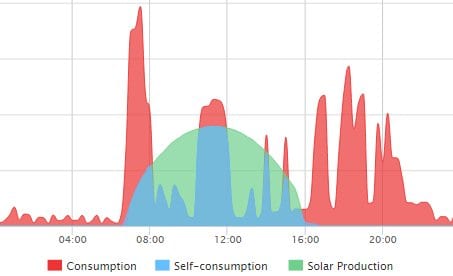 The green area in the graph shows solar power which is generated by the solar power system but hasn’t been required; it’s called surplus power. We buy power at around 25c a kWh so the blue section of the graph is saving 25c a kWh but the green surplus power is being sent back to the grid, usually for only around 6 to 8c a kWh. At that low rate it doesn’t make sense to send surplus power back to the grid, so why not store it in batteries and draw from it when you need it?

How a solar power system with a battery bank works

You see the issue here is that in both cases a solar power system can be called “battery ready” by a sales person but the difference is in how much extra work and components are required to actually get the solar power system working in conjunction with a battery.

Solar panels – this ones pretty obvious, for a solar power system to be what it is you need solar panels!

Hybrid Solar Inverter – for a solar power system to work with batteries you need a hybrid solar inverter – it’s called a hybrid as it’s a standard grid connect inverter but it can also charge and discharge batteries, hence the hybrid name. For 3 phase supplies we recommend the Fronius SYMO hybrid inverter, for single phase systems we recommend the SolarEdge StorEdge solar inverter.

DC Coupled Battery Storage Solar Power Systems
Both these solar inverters are designed to be “DC coupled” to a battery bank such as the Tesla PowerWall; this is the most efficient way to connect a battery bank as the system is designed to take the DC solar power generated by the solar panels and send it onto the batteries as DC power.

AC Coupled Battery Storage Solar Power Systems
Most other solar inverters out there which can connect to battery banks and may be classed as battery ready use what’s called an “AC coupled” system to take the power from your solar panels to the battery. This is quite inefficient as the DC power from the solar panels is converted by the inverter into AC power, then back to DC power to charge the batteries. When the power stored in the batteries is required it is then once again converted from DC to AC for use. Each of these conversions from DC to AC and AC to DC lowers the efficiency of the system which is why it’s not recommended as the best option for a solar power system with battery storage.

A great new device from SMA called the Sunny Boy Storage is an AC coupled system which is separate to your grid connect inverter and can couple to any existing grid connect inverter system to store your surplus power. This product is designed to work with the Tesla PowerWall Home Battery which Gold Coast Solar Power Solutions are certified installers of. 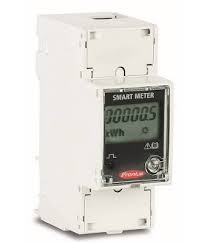 the batteries what to do. It constantly monitors the power consumption of your property and this important data is used to tell the hybrid inverter what to do with the power from the batteries and from the solar panels. If the solar power system is producing more power than your property is consuming it will automatically send the required solar power to be used to power your appliances and send the surplus power to charge the batteries. If the property starts using more power than the solar is providing it will draw the additional power as required from the batteries. Obviously this electricity meter is a crucial component to maximise the self consumption of your solar power; if you are wanting your solar power system to be battery ready we highly recommend installing the electricity meter to suit the battery storage system initially, as the data that this meter provides will help you select the optimum sized battery when you are ready to look at them.

Buyer Beware! An important point to keep in mind

A point that needs raising in regards to battery ready solar power systems is what happens if there’s a blackout and you lose power from the grid? If your intending to put in a battery storage system you’re probably just expecting power will be available from your batteries if the grid goes down – right? Well BEWARE! – this is not necessarily the case!

The battery storage systems such as the SolarEdge StorEdge inverter, Fronius Hybrid, do provide backup power of some essential loads, but beware that quite often this is not the case! It’s worth asking the question as you don’t want to find out when there’s a blackout and you were expecting to have power.

As we have discussed many standard grid connect solar power systems can be called “battery ready” however if you ever wanted to upgrade the system to actually work with batteries you would be looking at potentially more than $5000 in additional costs to get the system ready to work with batteries; and that cost is before the cost of batteries.

At Gold Coast Solar Power Solutions we highly recommend if you want to install a solar power system that is truly “battery ready” to initially install an inverter system which can be DC coupled to the batteries such as the 3 phase Fronius SYMO hybrid inverter system or the Single phase SolarEdge StorEdge solar inverter. This will be the most efficient system which is ready for any future technological advances – DC coupled systems are the future without a doubt. We also highly recommend installing an electricity meter with the initial installation as it will provide valuable data on your power requirements and will be invaluable in sizing the optimal battery storage to go with your solar power system – a system that is truly battery ready!