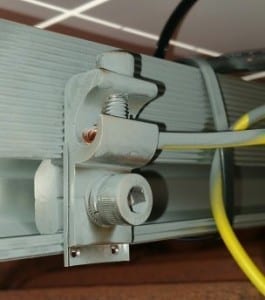 It’s very important that the solar panel mounting rail is earthed as shown in this image to avoid electric shocks when using a transformerless inverter.

Transformerless inverters are very efficient inverters however they can lead to an issue with solar panels and solar panel mounting systems on older solar power systems that haven’t been earthed as required in the latest Australian Standards.

Most older solar power inverters such as SMA (not TL models), Delta, Fronius IG series, AeroSharp, Latronics, Sharp and Xantrex inverters among others were transformer inverters whereas a lot of the new solar inverters have a different design or topology; they are transformerless inverters.

How to Avoid Electric Shocks With Transformerless Inverters – Earthing 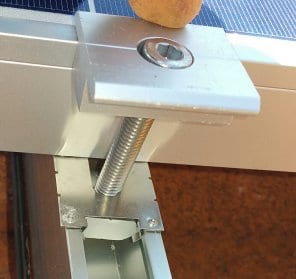 Earth washer used with mid clamp to ensure the mounting rail earth extends to the frame of the solar panel.

To remove the risk of electric shocks from your solar panels it’s very important when your inverter is being replaced with a transformerless inverter to ensure your solar panel mounting system is earthed; or another option is to replace your inverter with a transformer model such as the Fronius Galvo series of inverter; however the Fronius Galvo are only available in 1.5kW, 2kW, 2.5kW and 3kW sizes.